Ashton Member
November 2014 in Thoroughbred Racing & Sales
Tiago at Adena Springs-
The first time we got to visit Tiago he was recovering from colic surgery. Six months later in Oct. 2012 we literally passed Mr. and Mrs. Moss leaving on the road leading to Adena Springs...as we passed them, I thought I had team Zenyatta/Tiago/Giacomo on my brain and I was seeing things until the groom shared with us that we had just missed them. He grinned and with a look in his eyes and tone in his voice of pure admiration he told us they thought they would have to pry Mrs. Moss off of Tiago. The very next visit (six more months latter) He shared that Tiago suffers from a very rare disease that only 13 other thoroughbreds on earth have ever had. He said it looked grim and it still does.....Our visit this past month October 2014 he shared with us that Tiago has outlived the other 13 horses who suffer from this dreaded disease by over a year and a half. He requires special food and meds every 30 minutes around the clock 24/7 and will for the rest of his life. On April 7, 2007-Tiago burst onto horse racing's national stage by rallying dramatically to win the Grade 1 Santa Anita Derby with odds of 29-1. This was jockey Mike E. Smith's first trip aboard the bay colt. He won Grade 2 Swaps Stakes at Hollywood Park on July 14. On September 29, he won the Grade 1 Goodwood Breeders' Cup Handicap at Santa Anita Park by a nose over Awesome Gem. This guaranteed the colt an automatic berth in the Breeders' Cup Classic thanks to the new "Win and you're in" program. He was the only three-year-old in the Goodwood Handicap, triumphing over older and more experienced horses. The colt was so excited in the testing barn after the race that he had to be administered a tranquilizer. Aside from having been one amazing race horse, beating the odds multiple times on the track-running a game third behind Rags to Riches and Curlin in the 2007 Belmont, and again running third in the 2008 Breeders' Cup Classic behind Ravens Pass and Henrythenavigator while finishing ahead of reigning Horse of the Year Curlin, TIAGO has already defied the odds. He was running in his paddock, alert and one happy horse last month. This is the kind of amazing temperament that allows any being, equine or human to beat the odds in life. My moma outlived her 'expiration date' by almost a decade. She loved Tiago with all her heart. I can't help but believe it was because in part because she saw a kindred spirit in him. Like many of us, she always had a huge soft sport for the little guy who was supposed to lose, or as she used to say "didn't know they we not supposed to win". May the winning spirit that has lead him this far, lead him to a mind blowing record of defying the odds. Remember him in your prayers, but I think he's going to fool them and be around for years to come. This is dedicated with all my heart to TIAGO, those who love him, and for those who are determined to beat the odds. NEVER GIVE UP........And remember tell them you love them every chance you get. ~A 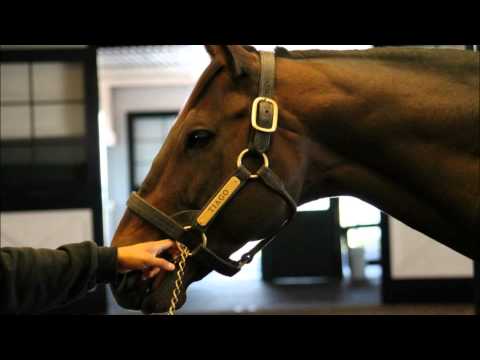